My experience with my M5 Card Phone

Written by Ebo Eppenga on August 26, 2015. Posted in General 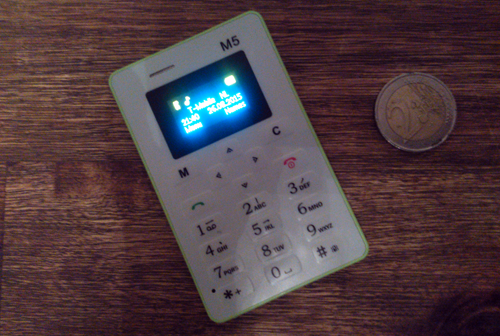 Today I received my new M5 Card Phone! What a nice little phone! I decided to buy this phone because my current phone, the CAT S50, has some issues and is a bit big to carry around if you sometimes only need to called. The phone costed only € 15,03 and I bought it at AliExpress.

Actually I thought there might be a good chance that it wouldn’t work, or would have problems with my European SIM, I mean what can you expect for fifteen Euro’s? But…it works great! It’s a little smaller than two credit cards on top of each other (85x55x4.5mm) and you can charge it via USB.

It looks like a small calculator, feels a bit plasticy, hardly weighs anything and you can get it in a variety of colors. By the way it doesn’t come with a manual, I didn’t need it, but I’m sure you can find it somewhere on the web.

Personally I think it’s a great phone if you need to be contacted and don’t want to carry a big smartphone around. This baby has a good feature list (it’s not a smartphone, but it’s more than enough for a phone), the price is more than acceptable and the quality seems quite good.